skip to main | skip to sidebar

With Dunedin under water from all the recent rain it seemed like a crazy plan to head into the hills for a Rogaine. However as we travelled in land the weather cleared.
Now for those who do not know what rogaining is, it is a bit like orienteering but do it in a team (the team has to stay together), your team plans the route it will take and it’s done over a longer time period. There are a whole bunch of controls set up out in the middle of nowhere, each worth a different amount of points depending on the controls difficulty (e.g. a control on top of a mountain will be worth more than an easy to find control on the side of a road). There is a set time period, and during that time the goal is to get as many points as possible. 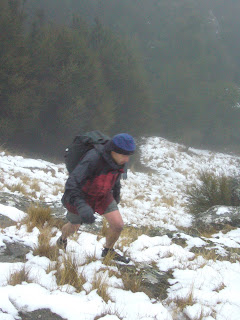 Out in the snow
This weekend we had entered a team from the PE school in the 6 hour race. The team consisted of my supervisor Jim Cotter, another lecturer Geoff Ockwell, student Hayden McCoy and myself. As Geoff and Hayden had never done on of these races before the goal for the race was to get out and have a look around at some of the high country around that area and if possible get up into some snow. 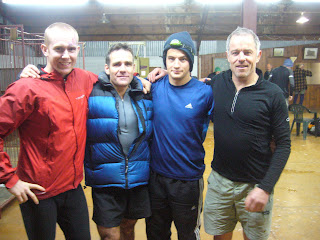 The team me, Jim, Hayden and Geoff
After a solid 6 hours out getting controls we were still not back at the finish which meant we would be penalised 10 points for every minute we were late. A big effort by the team running as hard as tired legs would let us. We made it back 20minutes late, which we thought would put us out of any placing. But to our surprise at the prize giving we had managed to take 1st place. All in all a great day out, we got to look around some great country, we found some snow and we managed to take first place. 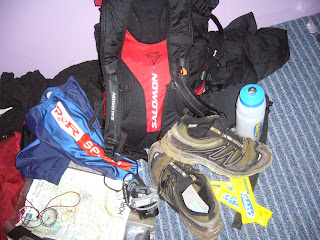 There was not much time to reflex on the day’s activities as it was straight back into the car to get home for the 3rd round of the Dunedin Winter Multisport Series the next morning.

Posted by Matty Graham at 6:15 PM No comments:

Matty Graham
The purpose of this blog is to keep my sponsors, friends and family updated on my training, racing and just life in general.

See You Out There